Unsuccessful loan spells, games at centre-back and a severe lack of game time – Carlos Vinicius‘ career in native Brazil didn’t take off as it does for top-of-the-crop youngsters. A hat-trick on his debut in Portugal, however, kicked off his rise to the top of European football. One year later, the 25-year old attracts interest from Manchester United, setting the Liga NOS afire scoring 15 goals for 2nd-placed Benfica.
Thanks to Bruno Lage’s tactics, Carlos Vinicius has been able to show brilliant flashes of his ability. The following scout report, however, looks into how exactly the forward has been performing on a physical, tactical and technical level.

As the player analysed is a centre-forward, a more appropriate opening to the tactical analysis than an old-fashioned look at his final-third prowess, does not exist.

Carlos Vinicius positions himself to the left side of the pitch, most likely due to his (much) stronger left foot. The yellow dots to the pitch borders should be taken with a grain of salt; his positioning mostly is a consequence of the location of the ball. Usually however, the Brazilian plays left off the centre, so he can take up good angles to shoot towards goal.

This habit also means an overload of his shots originate from the left side of the goal, while his goals (blue diamonds) themselves, dominate the left even more. It would seem that the left side of Vinicius is the most dangerous.

While the amount of goals seems impressive, it would only be fair to doubt their sustainability. What separates the good from the great, is the variation in shot power, location, target, parts of the body used to strike the ball with, and the different ways of creating those opportunities.
Liverpool target Carlos Vinicius, has to improve on a lot of these assets.

As previously mentioned, the locations of his shots are too one-sided, making him that tad bit more predictable in the future. The picture below reveals another shortcoming; that in the form of his one-dimensional targets.

Carlos Vinicius this season has shown a knack to keep his shots low – which is not a bad trait, as dropping quickly is often the kryptonite of goalkeepers. Yet, to reach the next level, the striker should put more variation in his shots.
The stats above also confirm his one-footedness. Ideally, this is more spread out across the left & right foot and the head. Standing tall at 190 cm however, this shouldn’t be a problem for the Benfica talisman, as this analysis has previously mentioned.

Vinicius and his physical advantages

On other physical levels, Vinicius is well-tailored for football too. The former Serie A prodigy has a tall and steady frame. Seemingly he has natural upper body strength, needed to hold off defenders in the box. Leg-body ratio! extra reach and better acceleration

Vinicius is blessed with flexible and agile hips, an underrated part in football. This flexibility allows him to turn around his axis quickly, but also strike a ball cleanly – even if he isn’t in the right positioning body-wise.

Following the screenshot, Benfica’s number 95 will deliver an accurate low cross to a teammate – effectively wrapping his dominant left foot around the ball. This asset is also very valuable when taking shots at goal. His agile nature allows him to shoot across goal efficiently – which is necessary considering Carlos often receives the ball from the right side.

Since Liga NOS’ top scorer is already 24, working on the right foot could be an uphill battle. Vinicius himself is – rightfully so – perfecting his craft, as reflected by his constant positioning. Self-aware of his left foot’s danger, the striker always plays off the right centre-back. In his blind-side, he can move freely and create that extra yard to control the ball and get a shot off.

Controlling the ball however, is not Carlos’ best quality. His first touch is inconsistent from different angles and speeds; he rarely gets the ball ready to pass cleanly after a first touch. He particularly struggles to control the ball at knee level, which could be explained by his long legs. Often the ball bounces around, inviting pressure. Defenders are therefore instructed to follow him when he receives in the second phase (when the game is being played in the middle of the park), as there’s a good chance the ball will be won.

This does not help Carlos Vinicius’ movement in the second phase (seen below), where he likes to drop deep to link play. Dropping between the lines disrupts the backline, and can hurt them if the striker can quickly switch the ball to the other side. The Brazilian however, has to improve at this.

On the ground however, his first touch is neat as ever. The ball stays close to his feet as it should, making him a great linking player. The Benfica man can also efficiently flick the ball on though, progressing the ball forwards to his teammates.

Vinicius could rightfully be conceived as a great counter-attacking player, as backed up by his ball-carrying map below.

While the starting positions of the carries suggest he’s a very left-sided player, they also show his vertical playing style. The length of the blue arrow (carries) also tell us he’s an accomplished dribbled, which the eye test confirms.

The static picture above shows Carlos the second before he carries the ball into the opposition box; which he is afforded due to his great acceleration. His lanky frame may not suggest te Brazilian dribbles efficiently, but nothing less is true. Vinicius’ acceleration and quick stops make him very unpredictable, while he also varies his speed very well when dribbling.

This map too is very promising. According to the map, Carlos Vinicius is a purposeful dribbler too, as lots of dribbles end up in a shot.

Even as a pitbull on the ball as he is, the fierce character of Carlos doesn’t back down when defending. The Brazilian is an intense presser off the ball and greatly contributes to the defensive side of Benfica’s game.

The recoveries map above tells us Carlos Vinicius also tracks the ball when it is played down the left only – due to the pressing shape of the 4-4-2 which Bruno Lage deploys.

Despite the right-winger pushing up, it very much still is a 4-4-2 medium block. Carlos Vinicius leaves his position to press the ball-carrying centre-back, after Porto circulated the ball. This is a testament to his pressing will and intensity; chasing the ball over so many yards.

A nowadays more important aspect of pressing called ‘cover-shadow’ is what Carlos Vinicius has to work on though.

As depicted above, the Brazilian often leaves his opponent open. This is not unimportant, because he often opens the access to central spaces for the opposition team. Turning his header over his shoulder and thereby looking for the opposite midfielders could do wonders for Vinicius, and also the team’s defensive shape.

The Brazilian has a competitive character with beautiful attributes such as his shot power, agility, length, strength, hold-up play and counter-attacking prowess, yet, Carlos Vinicius’ game has a lot of polishing to do. There needs to be more variation in front of goal so opponents wouldn’t be able to read his game in the future, and his ball manipulation needs to improve.

His skillset now ,however, has already proven to be very effective, topping Liga NOS’ goalscoring charts with 15. Whether he is ready to play for a top Premier League or LaLiga club, is to be seen. For now, another season leading the line at Benfica wouldn’t hurt his career. 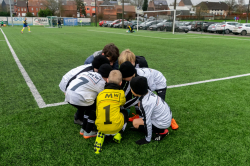