Aberdeen hosted Hibs in an important game in the race for European qualification. Five points separated the sides who sat 4th and 6th respectively. Aberdeen came into the game following a 2-2 draw away at Kilmarnock three days earlier. While the visitors were aiming to bounce back from a 3-1 home defeat to city rivals Hearts.

This tactical analysis will look at the tactics used by both sides and provide an analysis of how these were adapted over the course of the game.

Both sides lined up with similar formations. The visitors continued with their 3-5-2 which has been a common system used since Jack Ross took over. While Derek McInnes reverted to the system which saw success in victories against Kilmarnock and Hamilton in February. Many sides in the Scottish premiership have used this system recently, including league leaders Celtic.

The hosts would continue to be without top scorer Sam Cosgrove and centre-back Scott McKenna through injury. Captain Joe Lewis started in goal, protected by a back three of Shay Logan, Ash Taylor and Andy Considine. Connor McLennan and Matty Kennedy played on the wings with Dylan McGeouch and Funso Ojo in midfield. While Lewis Ferguson supported Niall McGinn and Curtis Main in Attack.

Hibs, still missing Ryan Porteus and Stevie Mallan through injury, would be without forward Marc McNulty after his ban for a stamp in the derby. Ofir Marciano started in goal while Paul McGinn, Adam Jackson and Paul Hanlon continued in defence. Martin Boyle and Lewis Stevenson played as wing-backs either side of Steven Whittaker and Rangers loanee Greg Docherty in midfield. While Scott Allan played behind 20-year-old Jamie Gullan and top scorer Christian Doidge in attack.

With both sides operating with three-man defences, similarities can be seen in the way they operated. Shay Logan and Paul McGinn are both natural full-backs playing as right-side centre backs for their sides. Below, Paul McGinn frequently got the ball in defence and looked to step out with it on the right-hand side. With Martin Boyle a natural winger he would tend to play high, leaving space for McGinn to operate in. McGinn feeds the ball to Boyle on the touchline who holds the ball up attracting the attention of Matty Kennedy. This allows McGinn to underlap and drive into the space left behind Kennedy. Jamie Gullan drops inside leaving Andy Considine on the left side of the Aberdeen defence to deal with the McGinn. This results in a dangerous cross finding Christian Doidge at the back post and Joe Lewis turning his header away. An early show of intent from the visitors.

The right side centre-back stepping out can also be seen for Aberdeen. As Logan steps up to form a four across midfield, Connor McLennan stays high and wide to receive the ball. He delivered an early cross which didn’t quite allow Matty Kennedy to make his run to the back. Kennedy was allowed space due to Martin Boyle staying high up the park for Hibs.

Stepping out of defence can also lead to defensive frailties with the defender stepping out leaving space behind them. This would be clear to see in Hibs’ opening goal. Shay Logan had stepped up to build an attack, but a slack touch allowed Lewis Stevenson to win the ball. He gave it to playmaker Scott Allan to carry forward. The Aberdeen line became disjointed With Funso Ojo dropping in to cover Logan and the overlapping Stevenson. This allowed Christian Doidge (out of shot) to peel off the back of Considine, round Joe Lewis and score.

Hibernian’s defensive shape would also contribute to them conceding the equaliser. Following an Aberdeen corner on the left Hibs looked to counter but the ball came back with Aberdeen. Martin Boyle was caught out of position again as he looked to counter leaving plenty of space behind for Niall McGinn, who had been moved to the left-wing, to attack in. McGinn would receive the ball up the line from Kennedy and get it out of his feet to deliver an early cross without pressure from either Boyle or Paul McGinn coming out to block the cross. The introduction of Bruce Anderson allowed more bodies in the box for Aberdeen with Anderson, Main (out of shot), Ferguson and Taylor all making their way into the area. McGinn’s delivery only got as far as Adam Jackson who couldn’t sort his feet and turned the ball past Marciano.

Hibernian central midfielder Steven Whittaker received a second yellow card for a foul on Lewis Ferguson in the 55th minute. This changed the tide of the game with Aberdeen becoming more dominant. Both sides made changes following the sending off. Hibs replaced Jamie Gullan with Swedish midfielder Melker Hallberg on in his place. This change saw the substitute play alongside Docherty with Doidge now leading the line alone. This can be seen above at Aberdeen’s equaliser.

Aberdeen’s change would be an attacking one as Derek McInnes looked to take advantage of the extra man. Shay Logan made way for 21-year-old striker Bruce Anderson as the home side moved into a 2-5-3 formation. Niall McGinn played on the left of the front 3 while Anderson and Main both stayed central attacking the box. Hibs loss of a man in midfield allowed Aberdeen more space to win second balls after paying direct passes from defence to attack. This suited Aberdeen as their midfielders had looked to get the ball out of their feet early before moving it wide throughout the game.

Jack Ross would respond to this by reinforcing his midfield with another substitution. On loan from the Serie A, Genoa midfielder, Stephane Omeonga was brought on for Scott Allan to provide more steel in the midfield. Omeonga played alongside Docherty with Hallberg sitting slightly deeper. This change also saw Paul McGinn slot into his natural right-back position with Martin Boyle moving forward to support Doidge.

Both sides would make further changes in their shapes which would lead to Aberdeen’s third goal late in the game. After Andy Considine put Aberdeen in the lead they made a return to a 3 man defence. Mikey Devlin replaced Connor McLennan and Niall McGinn moved to the right-hand side.

10 minutes later, Hibernian would make an attacking move with Daryl Horgan replacing left-back Lewis Stevenson. This saw them return to a back three with McGinn tucking back inside and Boyle returning to the right-hand side. Aberdeen exploited this space behind Horgan immediately. Devlin played a long ball over the top which Ferguson latched onto and backheeled to Niall McGinn. McGinn played a ball into Bruce Anderson who’s shot was blocked before the ball broke to his strike partner Curtis Main to stroke home securing the Victory for the home side.

The first half was a fairly even encounter with both sides matching each other tactically. Hibs breakthrough would come thanks to a quick transition taking advantage of Shay Logan’s slack touch. Whittaker’s sending off in the second half was the turning point which allowed Aberdeen to take hold of the game. Both managers making a string of tactical changes in response to one another. McInnes seeming to get the better of Ross on this occasion. However, it could be argued this is more down to his sides man-advantage than the tactical changes made. They were able to overrun the Hibs midfield as Ojo, McGeouch and Ferguson looked to get onto the front foot from second balls after long passes to the forwards. This would ultimately make the difference as Hibs looked to chase the game. 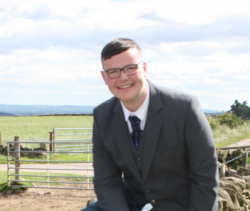