Mexico loves football so much that in the recent World Cup, their fans reportedly caused an earthquake celebrating a goal. This love for the game is portrayed by the impressive attendance in the Liga MX draws in every week. Liga MX is renowned for its fast, direct and shoot on sight approach. On average, each game has more shots and goals than the Premier League and La Liga.

With goals in mind, this data analysis will examine the most effective strikers based on several statistics. Players included in the data must have played 450 minutes, in Liga MX, this season. As the season is split in two, the Apertura & Clausura, the analysis will use data from both parts of the season.

Whilst strikers are evolving, and goals are not ultimately what makes them, it is undoubtedly the first thing they will be judged on. In this instance, we will start by comparing the number of expected goals (xG) and total goals scored. Both values include penalty goals.

André-Pierre Gignac is the player with the most goals and xG in the league. Gignac has scored 20 goals this season, surpassing his expected value of 15.94. The former Ligue 1 man has certainly had no issues settling in, scoring at least 15 goals a season since arriving. For a player of Gignac’s calibre playing in a Tigres side, champions four times in the last five years, it is unsurprising that he leads the way in this one.

Not far behind is Necaxa frontman Mauro Quiroga. Quiroga has an expected goal value of 14.8, however, he has managed to score 18 this season. None of these 18 goals have been from the penalty spot making his tally even more impressive. In his first Liga MX season, Quiroga is proving to be a useful addition, currently the second top goalscorer in the league.

Several players are hot on the tail of Quiroga and Gignac. Jonathan Rodríguez is the next top-scoring striker, bagging 16 goals which is way past his expected 10.96. Rodríguez’s 16 goals are the most he has achieved in a season. After moving around several Liga MX clubs, he will be hoping that this is his platform. Sadly, he did not get the chance to continue his fine form due to the suspension of the Clausura.

Rogelio Funes Mori and Franco Jara both have 15 goals this season. However, Funes Mori slightly edges this, with an xG of 14.27 as opposed to Jara’s 15.24. Funes Mori’s goals proved to be much more valuable as he recently fired Monterrey to their first championship in nine years.

Several other players perform well in this area. Nicolás Alejandro Ibáñez, of Atlético de San Luis, has an xG of 11.84 but has managed to find the net 14 times this season. José Juan Macías has also scored highly this season, scoring 13 with an expected value of 11.07. Julio Furch also netted 13 goals this season, however slightly below his expected 13.41.

All these players have scored 10+ goals and will be deemed the best strikers the league has to offer. One player who certainly catches the eye is Club América youngster, Federico Viñas. Currently, on loan from Uruguayan side Juventud, the 21-year-old looks to be a real prospect. Viñas has scored eight goals in 15 appearances in Liga MX, this season. However, those eight goals are more impressive when we consider Viñas’ expected goal value of 3.46. Viñas is the only striker, in Liga MX, to score two times his expected goals.

Expected goals (xG) and goals are a good indication of how strikers are performing. However, by evaluating the goal conversion % and shots in the box we can explore whether these strikers are taking their chances and how clinical they are in front of goal.

Firstly, two players stand out from the rest, one for good reasons and another not so much. Federico Viñas is adding more support to his impressive goal scoring form. Viñas only averages 1.99 shots per 90, however, his goal conversion % is an astonishing 36.36%. These statistics coupled with his xG/goal data suggest Viñas is extremely clinical in front of goal.

However, at the other end of the spectrum, we have Juan Iturbe. The ex-Roma man has never managed to hold his place down as he bounced from club to club. Iturbe has one of the lowest conversion rates, only converting 4.44% of the 4.06 shots he attempts per 90. As mentioned earlier, Liga MX has one of the highest numbers of shots per game (11.1), so it would seem like a good fit. Unfortunately, with two goals this season, Iturbe has struggled to find the back of the net often enough.

This next section will provide us with some context of the type of players we are looking at. Statistics such as offensive duels and touches in the box per 90, allow us to evaluate how active each striker is.

Roger Martínez, Club América, has by far the most offensive duels per 90 with 20.90. When deployed as a striker, Martínez often drifts out wide to his other natural position of winger. Despite this, he also has a high number of touches in the box, with 3.34 per 90.

Central to the chart, we see several players we have previously mentioned. Gignac and Funes Mori have very similar statistics, attempting 6.74 and 6.97 offensive duels per 90, respectively. Their touches in the box are also alike, with Gignac having 3.56 per 90, whilst Funes Mori has 3.78 per 90.

One player previously mentioned was Mauro Quiroga. With 18 goals this season, we would expect Quiroga to be very active in and around the penalty area. The data suggests the very opposite, with Quiroga only engaging in 4.30 offensive duels per 90. The lowest of all the strikers used in the data analysis. Quiroga has a high number of touches in the box per 90, with 3.81, the fourth highest of those analysed.

Towards the top segment of the chart, we have a group of three players, who have a number of touches in the box per 90. Vincent Janssen has the highest with 4.39 per 90. Henry Martín and Enrique Triverio also join Janssen, having 4.33 & 4.21 per 90, respectively. All three players also engaged in over 11 offensive duels per 90, showing they are very active strikers.

Based on the previous data, we will now further investigate four players who scored highly in the categories above. The statistics will be used to provide some tactical context on the type of players we are highlighting.

A seasoned veteran, who knows exactly where the goal is. Four championships and over 100 goals since his arrival in Mexico, one of the best strikers to grace the league.

Gignac does what all strikers need to do, and that is to score goals. He is the top scorer this season with 20 goals (xG = 15.94). Whilst he doesn’t engage in an extremely high number of offensive duels per 90, 6.74, Gignac does win 33.33% of those. Gignac is not a player who will create a number of opportunities for his teammates, with only 0.09 expected assists (xA) per 90. However, with an 18.87% goal conversion rate and 40.57% of shots on target, he can be relied upon in front of goal.

His first season with Necaxa has proven to be very successful scoring 18 goals from an expected 14.8. The Argentine will be very happy with his debut season, currently the second top goalscorer in the league. It is also his best tally for a season since turning professional.

At 6’2”, Quiroga unsurprisingly wins 55.90% of the 12.85 aerials duels he attempts per 90, the highest in the data sample. He also has the most headed goals this season, leading the way with 10. Quiroga had the lowest offensive duels per 90, 4.30, suggesting Necaxa utilise his aerial abilities most of the time.

Rodríguez and Cruz Azul had a disappointing Apertura, only finishing 12th and missing out on the liguilla. During the Apertura, Rodríguez only scored seven goals.

Cruz Azul started the Clausura much better, top of the league and Rodríguez the top goalscorer with nine goals (xG= 7.12).  Rodríguez recently transitioned to playing in a front two, and it would seem that this move has made him a more rounded player. Whilst his goal scoring is impressive, he also has the highest xA (0.15) and smart passes (0.68) per 90 out of all the players we have shortlisted. This shows chance creation is a big part of Rodríguez’s game.

The youngest of all the shortlisted players, and currently on loan from Uruguayan side Juventud. Club América has plenty of strikers at their disposal, meaning Viñas’ opportunities have been limited (15 appearances). However, when Viñas has played he has shown what a prospect he could be.

What impressed me the most was how clinical he appeared in front of goal. Scoring eight goals from an expected 3.46 is very impressive and was highlighted further with his 36.36% goal conversion rate. Viñas could be a real talent, and at only 21 he certainly has the potential to keep improving. Viñas doesn’t score too highly in some of the other categories such as xA per 90 (0.01) and offensive duels won (27.68%), suggesting chance creation is not a key element for this player.

This data analysis aimed to use statistics to find the best strikers in Liga MX. The data has provided us with a good basis to explore some of the top strikers. However, without a tactical context, it’s difficult to understand how these players affect their team and the match itself.

No player is truly comparable, therefore further analysis of each player will allow us to reach a more concrete verdict on the real qualities these strikes possess. 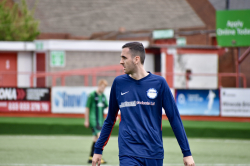