Raphaël Varane, Serge Aurier, Thorgan Hazard, Geoffrey Kondogbia or more recently Benjamin Bourigeaud, Mounir Chouiar and Wylan Cyprien. RC Lens is renowned for the quality of their training ground, which is among the best in France. The club’s policy is focused on youth and this allows all its youngsters to start very early on the pitch. This is the case of Jean-Ricner Bellegarde, who arrived at Lens in 2013 and made his professional debut at the age of 18. Reputed to be a shy player, he was given the captain’s role at just 19 years old, so that the Franco-Haitian could assert himself more on the pitch. His performances in Ligue 2 allowed him to join the French U-19 and U-20 team in 2017. He took an important step in his career in the summer of 2019, when he signed for RC Strasbourg for the sum of two million euros, where he discovered Ligue 1. At the end of 2019, he got his first cap for the U-21 team. In this tactical analysis, in the form of a scout report, we will see his impact in the Strasbourg midfield and what kind of player he is.

Bellegarde has been a starter 16 times out of 24 games this season. Strasbourg coach Thierry Laurey had used many different tactics this year, alternating with two or three-man midfielders depending on the opponent and his desire to strengthen his midfield. Bellegarde has overall occupied three positions: right defensive midfielder, right centre midfielder and defensive midfielder. He has rarely had the same partners at his side in midfield. He has been associated with Dimitri Lienard, Youssouf Fofana (Monaco), Ibrahima Sissoko, and Adrien Thomasson, not necessarily facilitating his integration into the Strasbourg team.

The above heatmap already gives us an important indication. Bellegarde is a player with a lot of work rate and a presence all over the field. The modern box to box midfielder who brings as much on the offensive as on the defensive side.

One of the most striking things about watching Bellegarde play is his ability to cross between the lines with his runs. He loves to get into the open spaces left by the opposition’s block. He drives the ball very well and quickly. He is a dynamic player with a good balance, which allows him to reorient himself continuously according to the movement of his opponents. He also has very good acceleration and takes a lot of speed in a few seconds, helped by his small size, which makes him very mobile (170cm and 66 kilos).  He can find the space well between the lines.

Thanks to his ball protection and his ability to put his body in opposition, he obtains fouls, 1.4 per game on average. Bellegarde knows how to use his small size and low centre of gravity to protect the ball. He uses his body to keep his opponent at a distance and Loic Rémy, who is in the duel, can only make a foul if he wants to retrieve the ball.

As can be seen in the graph above, he is one of the midfielders with the most dribbles per game in Ligue 1. He averages 1.4 dribbles per game and has a dribbling success rate of 65%.  He is good in one-vs-one situations and easily manages to eliminate his opponent thanks to his speed, his short-dribbling skills and close ball control.

On a low retrieve, Bellegarde grabs the ball and launches the counter. He sees directly the free space left by Lille players who are in defensive transition.

He then accelerates for about 50 metres, dribbling two Lille players including Renato Sanches. After a big effort, he can finally serve Lienard on the left side.

Similar action here, where Bellegarde shows his skills in short spaces to eliminate two players and moves into the free space.

After breaking lines with his run, he can serve Kevin Zohi who is in one-on-one. These pictures also show a form of confidence on his part.

Off the ball movement

With or without the ball, Bellegarde likes to make himself available and bring presence to the open areas. He always attacks the space left empty by the opponent and positions himself between the lines. Either he becomes an interesting passing solution for his partners or he attracts opposing players to him and creates space for his teammates.

In this phase of the game, Bellegarde sees space between the opponent’s lines and inserts himself into it. He can then be found in a triangle game or can continue his run in the half-space.

His close call on the right side poses a dilemma for Lille centre-back Gabriel, who must either follow Bellegarde’s run into an empty space or maintain his position. If he leaves his position, he allows Lebo Mothiba or Benjamin Corgnet to move between him and Adama Souamoro and opens the way to the goal. Bellegarde is always active during offensive transitions and attacks. He doesn’t always move to be free and get the ball, but also to create space for his teammates.

Last year, Bellegarde had a complicated early season with RC Lens before finishing the season very well. He only started 13 times and scored five goals. He scored the first goal of the playoff to access in Ligue 1 against Dijon. He showed that he could be a good finisher. This year it is more contrasted on this plan there, he shoots 0.6 times per game on average and 0.77 of xG. This is partly due to the fact that he plays in front of a playmaker, Adrien Thomasson, who is close to the forwards. That leaves him less space to express himself close to the goal. When he was a first team regular at Lens, he was usually the most advanced midfielder and was often seen supporting the forwards.

Being less present in the finishing area also allows him to develop other aspects of his game, particularly his passing skills. That was one of his weak points at Lens. His big work rate on the field and his big efforts certainly make him lose a little bit of lucidity, even still in Strasbourg. He has a pass completion of 87% this season, with 78% of the passes he’s made in the opposition camp, which is pretty decent. He has an average of 42 touches per game and makes an average of 0.9 key passes per game (21 key passes in total). As soon as he can play forward and look for players between the lines, Bellegarde will do so. He has an offensive mindset and tries as much as possible to progress with the ball. He takes a lot of risks and that leads to ball losses, but he gives rythm to the Strasbourg game. His vision of the game also allows him to quickly notice his teammates free and in dangerous spaces. Bellegarde combines very well with his partners in small spaces thanks to his agility and his ability to stand out quickly.

Counter-attacking situation against Lille. The Lille defender positions himself to cut the pass line in the depths towards Corgnet. Space is reduced but Bellegarde will send a perfect tight pass that allows Corgnet to move towards the goal. The latter finishes the action badly but we can see Bellegarde’s whole vision of the game on this action. This pass should have been decisive.

Here he had an easy choice of pass on his right side, Mohamed Simakan, but he will prefer to make the pass that breaks the line. His pass is tight and it goes around the Lyon midfield. That gives his winger time and space to move forward. Note that once the pass is made, Bellegarde moves in the free area.

Twice he will make a lobbed pass that takes too much height and allows the opponent to anticipate the trajectory of the ball. His teammate who receives the ball is immediately harassed by an opponent. His lobbed passing skill is not good.

An area of improvement for Bellegarde is his effort management. We can feel him struggling at the end of the match and physically tired. That’s partly explained by his work rate throughout the match but it prevents him from having the same performance over 90 minutes. We’ve seen him cramp several times at the end of the game. It’s important to know how to manage your weak times.

In this part of the scout report, we’ll see how Bellegarde is doing on the defensive phase. An average of 0.9 interceptions per game and 1.7 tackles. That’s pretty low when compared with midfielders with the same profile as him. Valentin Rongier (Marseille), who plays as a relay midfielder has an average of 1.5 interceptions per game and 3.1 tackles. Benjamin André (Lille) has 2.3 interceptions per match and 2.8 tackles. The differences are quite noticeable and yet Bellegarde is very active in the defensive phase. He presses a lot, tries to position himself to cut the passing lines, wins many duels on the ground (4.3 per game). He is much more at ease in active defence than in passive defence. He has an average of 6.75 recoveries per game, of which 2.92 in the opposing camp. This shows his willingness to retrieve the ball quickly and his pressing effort. It is a box to box midfielder who puts pressure on the ball carrier. One of his weaknesses is obviously the aerial game, due to his small size. He only wins on average 24% of his aerial duels.

In a set piece, he leaves his team’s block to go and control the ball carrier, here Maxence Caqueret. The Lyon player has no solution forward and can only play on his partner on the left, who is going to be pressed directly by the right winger from Strasbourg. His pressing makes it difficult for Lyon to progress.

A simple glance allows him to see a free opponent between the lines. He readjusts his position and cuts the pass line.

However, he needs to improve his sense of anticipation and his reading of the game without the ball. There are several situations this season where he is late. In this situation, he sees that Téji Savanier has outpaced his partner in the middle area and he must immediately react and position himself between him and the goal. He reacts only too late and Savanier scores with a beautiful shot.

During PSG‘s attack, Bellegarde was out of line with his midfield partners and left a big gap between the lines. He does not readjust his placement and Neymar can turn and shot. It’s an action where the Strasbourg defence was well set up but one player’s poor placement can have big consequences.

As we saw in this analysis, Bellegarde is a very promising player, as evidenced by his first selection to the French U-21 team despite the strong competition in midfield. Indeed, he is alongside Houssem Aouar, Matteo Guendouzi, Jeff-Reine Adelaide and Boubakary Soumaré. His style of play fits perfectly into modern football. He has a big presence on the field, very comfortable with the ball at his feet and capable of creating uncertainty for the opponent with his runs or passes. He has a lot of areas for improvement and there are several aspects of his game that need to be improved. He still makes many bad choices and needs to be more efficient in the last 30 meters. But he’s only 21 years old and has been making steady progress since his arrival in Strasbourg. It’s encouraging and very promising for a first-year in Ligue 1. The experience and playing time he is acquiring at the highest level will help him a lot in his development. 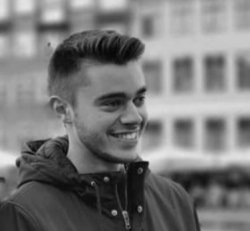 Benjamin Duhem
I'm 22 years old and I'm French. I've been a big football fan since I was a kid, very curious about the tactical aspect of football.
Twitter: @BenDuhem01