The timing of the announcement couldn’t have been better. On 1st June 2002, Liverpool claimed to have signed El Hadji Diouf on a long-term deal. Racing Club de Lens were quick to refute the claim.

The Premier League club had made the announcement one day after the opening match of the FIFA World Cup, jointly hosted by Japan and South Korea. In said match, France had been clear favourites to beat debutants Senegal. However, the then African Player of the Year not only caused the defending champions a whole lot of problems with his pace and trickery but also helped Lens teammate Papa Bouba Diop score the game’s only goal.

If Liverpool had been prompt in making the claim Lens were equally quick to issue a denial:

“Contrary to the announcement made on Saturday, Lens would like to make it clear that El-Hadji Diouf has not been transferred to Liverpool, and no contract has been signed,” a statement released on the club’s website said.

“The player’s representatives and the two clubs agreed on Friday to continue discussions at the end of the first round of the World Cup.

“Knowing that replacing a player of his potential and ability would be complicated, the Lens president Gervais Martel will continue to think over the matter.”

By the time Diouf finally signed a five-year deal with the Merseyside club, three things had happened. One, the World Cup was over – Brazil winning a record fifth title. Two, Senegal had impressed everyone, making it to the quarter-finals in their maiden appearance.

The third is actually the first. Defending champions France had suffered a humiliating opening-round exit – the first reigning champions to be knocked out of the tournament at the first stage for 36 years, and Roger Lemerre, their manager had conveniently been made the scapegoat and subsequently shown the door.

Following that shocking opening day reverse against Les Lions de la Teranga (Teranga Lions), the holders could never really recover. They only managed a draw against former champions Uruguay before being on the receiving end again in their final group match against Denmark.

If the failure to win a game and the group phase exit wasn’t humiliating enough, Les Bleus had failed to score even a single goal. The fans were palpably furious. There was intense media pressure as well. Everyone expected Lemerre to resign in disgrace.

The veteran, who had guided the French team to their Euro 2000 win as well the 2001 Confederations Cup, rather stubbornly refused to do so. It didn’t take long though for the inevitable to happen.

Lemerre was dismissed as coach of France following a meeting of the French Football Federation (FFF) in Lyon.

“I sincerely think that firing Roger Lemerre was the easiest solution. There had to be a guilty party, and it was him. He was the ideal prey. He had his share of responsibility like everybody else, like the French FA who organized friendly matches at the other end of the world, but the actors – the players – have the greatest share of it,” – Patrick Vieira post-Lemerre sacking

His dual trophy wins with Les Bleus notwithstanding Lemerre’s tenure was anything but hunky-dory. Having assisted Aime Jacquet during the French team’s 1998 World Cup triumph (on home soil), Lemerre was the heir and expectedly took over as the national coach following the former’s resignation.

That marked the beginning of what eventually turned out to be a bittersweet episode of his career. The fact Lemerre neither had good professional relations with the powers to be at the FFF nor a convivial relationship with the media worked to his detriment. In fact, no sooner had the French secured qualification for Euro 2000 speculation was rife as regards the future of the coach, fuelled by a series of ambiguous remarks by both the man in question and the federation.

However, Lemerre not only stayed on but also got himself a contract extension. What he didn’t get, however, was any credit despite France qualifying automatically, as group winners, for the tournament jointly hosted by the Netherlands and Belgium. That he won the Euro 2000 title with almost entirely the same set of players (as 1998) was no doubt another achievement for the team, but no feather in the cap of their coach.

Lemerre nonetheless was blamed for shocking opening-round elimination the French suffered at the 2002 FIFA World Cup. The dismal performance by the players was shoved under the carpet.

The injuries to star performers like Zinedine Zidane and Robert Pires wasn’t taken into consideration. The fact that Les Bleus had an ageing defence – Frank Leboeuf was 34 years old then, Marcel Desailly was 33 and Bixente Lizarazu, 32 – was conveniently ignored.

Instead, the coach was unjustifiably made the lone scapegoat.

Lemerre, to his credit, was categorical and pragmatic as regards the French performance, rather the lack of it. He was honest enough to admit his side had lost the plot in the opening match against Senegal, and never really recovered following that abject effort against the debutantes from Africa.

“We have been in trouble since the first game. We have never been able to relax and play at our level. The circumstances have determined that our passage through the World Cup has been very difficult,” Lemerre was quoted as saying in the media.

However, neither his reasoning nor his stubbornness could save him. This particularly bitter episode for French football in general and Lemerre, in particular, ended with the latter being given the marching orders. Feeling hard done by Lemerre subsequently had a strained relationship with the press.

Towards the end of 2002, Tunisia offered him a chance to not only get over his French nightmare but also somewhat salvage his lost reputation. His brief was simple: to guide Les Aigles de Carthage (The Carthage Eagles) to a maiden African Cup of Nations title. And the Bricquebec-born grabbed the opportunity with both his hands.

“I was delighted to return to a country which has always held out its hand every time I’ve been shaken in France,” Lemerre was quoted in the BBC. “The 2004 African Cup of Nations is as much a challenge for the Tunisian national team as it is for me.”

With Tunisia – a team that had only previously made two final appearances at the tournament and never made it past the group stage – hosting the 2004 edition Lemerre drew up a schedule of international friendlies (against strong opponents) as preparations for his side. Not just that he reinvigorated his new team and drew commendable performances in those matches. In the run-up to the tournament, Tunisia won seven matches, drew three and lost just one.

Besides, Lemerre lent Tunisia a dash of South American flair with the inclusion of Brazilian-born duo of Francileudo dos Santos and Jose Clayton.

Tunisia began the 24th African Cup of Nations in convincing manner, topping their group following comprehensive wins over Rwanda and Democratic Republic of Congo, and a draw against Guinea. That set up a quarter-final against Senegal and ensured Lemerre an opportunity to exact revenge on a team that hastened his exit 21 months ago.

Senegal, the beaten finalists of 2002, still had the likes of Diouf, Diop, Henri Camara and Salif Diao in their ranks, and was managed by Guy Stephan – Lemerre’s assistant during both the Euro 2000 success and 2002 World Cup failure.

Yet the Teranga Lions looked sluggish and had trouble finding their groove in the group phase. Diouf, their 2002 World Cup hero, was yet to score in the tournament and was more than halfway through in what ultimately turned out to be an entirely barren Premier League season (2003-04) with Liverpool.

To their credit, Senegal put up a commendable show, to begin with, in the last eight encounter in Rades, and kept pace with their hosts for over an hour. Then midfielder Jawhar Mnari, with his first international goal, put Tunisia ahead, somewhat against the run of play.

In the run-up to the goal, Senegal felt hard done by. They believed they should have been awarded a free-kick for Khaled Badra’s challenge on Diouf, the Liverpool striker leading the protests as the Senegalese players surrounded referee Ali Bujsaim, and were subsequently joined by their staff. It took security intervention to control the ensuing melee.

The incident meant the Senegal team had not just lost their cool but also lost the plot and ended up losing the match. Tunisia went on to win their first ever continental championship in dramatic style, beating former champions Morocco in the final.

By adding the 2004 African Cup of Nations title to the 2000 European Championship the Frenchman became the first coach to win different continental crowns – a feat as yet unmatched in world football. 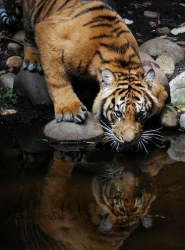 Arsenal are taking the risk of ending up like Manchester United

Why did Neil Warnock leave Cardiff City and who might replace him?

Why Relentless Brendan Rodgers is Perfect Antidote to Foxes Malaise